The O-2 Skymaster was manufactured by Cessna and designed for forward air control, visual reconnaissance, target identification, target marking, ground to air coordination, counter-insurgency, leaflet dropping, and damage assessment. The O-2A has four under wing pylons for external stores, including rocket pods, flare pods, napalm canisters, or other light ordnance such as a 7.62 mm mini-gun pod. In the FAC role, the O-2A identified and marked enemy targets with smoke rockets, coordinated air strikes and reported target damage. This was a dangerous mission and many O-2s and their pilots were lost to enemy fire. A total of 546 O-2’s flew 1,808,763 hours between 1967 and 1988. With back-up push-pull engines and other advanced features, the O-2A earned a reputation as one of the safest planes in the world. (Note: That reputation is for the O-2, flown by military pilots. The civilian C-337 has only an average safety rating for multiengine piston airplanes.)

The O-2A was intended as an interim aircraft, replacing the single engine O-1 Bird Dog (also made by Cessna) until the OV-10 Bronco could be deployed. As it happened, the O-2s continued in service after the OV-10s were fielded. This was partly due to the growing importance of night air interdiction missions. The O-2As pioneered the aerial employment of night vision devices for target spotting. This was done by a Forward Area Navigator, or FAN, who would look through the open side window of the O-2, using a telescope-like night vision device made for Army ground troops. This option was not available to crews of the OV-10 and early models of the Bronco were determined to be unsuitable for night FAC missions. This led to continued employment of the O-2s, often alongside of the O-1s they were supposed to have replaced. Some pictures from the time show all three observation aircraft on the same ramp.

The O-2, like the O-1 before it, was not well armored. In the beginning armor was restricted to steel plates in the bottom of the pilots’ seats. Later, a fully armored pilot’s seat became available, much like those fitted to Army attack helicopters. In addition, the mission profile required for both target location and battle damage assessment after a strike drew a lot of attention – and enemy fire -- to the light, slow flying aircraft. Different tactics were employed to reduce exposure and manage risk. Nonetheless, of the 456 O-2As deployed to South East Asia, 82 were lost to enemy fire.

Gross weight: Well, it depends…The FAA Type certificate says 4300, but there is supplementary letter from the FAA authorizing 4400. The USAF said 4400, but you could take off with 4600 as long as you landed with only 4400, and it could weigh up to 4850 as long as anything above 4400 was on the wings. The USAF flight manual has performance data for up to 5000 pounds. Veteran pilots report regularly taking off at weights in excess that!

Crew: One or two, depending on mission (Seats for three and sometimes 4 were available.) 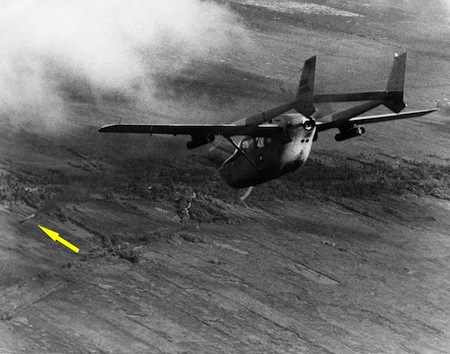 After delivery of the initial order of O-2As (Ser# 67-21295 thru 67-21439), the USAF asked Cessna to make some modifications as a result of experience in the field. Most important of these was enlarging the window on the pilot's side for better visibility in turns to the left. The window also bulged out a bit, improving downward visibility out the left side. This change included an external emergency window release handle, allowing rescue crews to get immediate access to the pilot. According to pilots who have flown both airplanes, the bulging window is supposed to reduce the speed of the O-2A by as much as four knots. This reported decrease in performance may be airplane specific, rather than valid across the modification. The USAF Dash 1 does not indicate any change in performance for early vs. late models and no two O-2A's seem to have the same performance, anyway. (In talking to other O-2A owners, mine seems a few knots faster than others.)

The new window design required replumbing the fuel lines, so that the fuel selector switch for the left tank (feeding the front engine) was moved to the right side of the cockpit. You might think that having both the left and right fuel selectors on the right side of the cockpit could create some confusion, but it actually solved a different problem. The left fuel tank selector was now to the left, or forward of the right fuel tank selector. This now made it clear which engine was drawing fuel from that tank. The second delivery of O-2A's (68-6857 thru 68-6903) had the same layout of the earlier 145 planes, but all deliveries from 68-10828 and higher are with the larger, bubble window.

The O-2A was special purpose built to USAF requirements to perform forward air control missions in a low-intensity conflict environment. It was expected that maneuvering stresses would certainly exceed that encountered flying in a civilian, peacetime environment; there was the requirement to carry and fire a variety of weapons; and – to be certain – there was the requirement to survive hostile encounters with unfriendly people.

Here is a list of some of the features that make the O-2A different from the civilian C-337 Skymaster:

Wings equipped with four hard points capable of mounting weapons pylons and 350 pounds of ordnance each or 550 pounds total among all four pylons. Allowable weapons weight was in addition to the 4300 pounds maximum weight for the civilian model C-337B. (Actual combat weight frequently exceeded 5000 lbs.)

Armaments panel and gunsight to use the weapons on the wings

Observation windows above, on right side, and built into door (and door could be jettisoned in flight)

The observation windows required the fuel system to be re-routed, with selectors moved from overhead to above the doors. Also, an emergency fuel selector was installed, to allow fuel to go from both tanks to both engines at the same time.

All electric instrumentation – no vacuum system

Fire detection system mounted on rear engine (I suppose that they thought an engine fire in the front engine would be self-evident.)

Belly skids and lifting eyes to enable quick repair after a belly landing or for recovery after an unexpected landing away from the airbase. (These also provide extra drag, with estimates of losing 8 knots of cruise speed over the civilian C-337)

Lots of other little things which makes many similar parts between the civilian and military versions NOT interchangeable. E.g., Engine control cables and attachments are thicker or built stronger ($)

In addition to the O-2A, there were 31 O-2Bs. The O-2B was a C-337A built for the civilian market by Cessna, and re-fitted with loudspeakers and leaflet dispensers for psychological operations (PSYOP) use. In this case, that meant propaganda (or battlefield information.) The USAF purchased 31 C-337A's that had already been built by Cessna, but not yet sold. These had the standard civilian instruments and layout, interior, and none of the unique attributes of the O-2A. One quick way to tell the difference is that the O-2B, like its civilian counterpart, has propeller spinners on the front and back, while the O-2A does not. That is not universally true, as some O-2A's have been fitted with spinners as part of their transition to civilian life. (The spinners add about 4 knots to the cruise speed.) As of the beginning of 2014, there was one O-2B registered as airworthy by the FAA, (466) which has appeared at the last two AirVentures.

The USAF was not the only purchaser or user of the O-2. Thirty-five O-2’s were transferred to the Republic of Vietnam. Others had a somewhat longer service life. In 1969, the Imperial Iranian Air Force purchased 12 O-2As. Current whereabouts unknown, but the FAA Type Certificate allowing O-2’s to be registered in the normal category specifically EXCLUDES these Iranian aircraft. Other Air Forces that have flown the O-2 include Costa Rica, Dominican Republic, El Salvador, Ivory Coast ,Haiti, Namibia, Solomon Islands, South Korea, and Zimbabwe. Zimbabwe is an interesting case. Two former USAF O-2’s were delivered in the mid 1990s. As the Government of Rhodesia, however, the country purchased more than 20 French built 337 variants, with O-2 features such as hard points, observation windows, and a very interesting pair of machine gun mounts on top of the fuselage. These are reported to have been very effective counter-insurgency aircraft, working in cooperation with other air and ground elements.

Chile, El Salvador, and Botswana are reported to still have O-2’s in service. I have been told, however, that Botswana is seeking to transfer their O-2’s to civilian aero-club status.

Some O-2s were reported to have been used by non-State armed groups in the conflicts in Africa. In one example, the Private Military Company, Sandline, reportedly used O-2s when operating under contract with the Government of Sierra Leone in that government's fight against the Revolutionary United Front and various foreign mercenaries. A former officer of Sandline related to me that while he was flying an O-2A, he forced down two Mi-24 Hind helicopters, piloted by Russian mercenaries. Sadly, I never secured permission from him to tell the whole story in public. Maybe if he sees this he can tell the whole story for us. The Private Security Company, AirScan used O-2As and C-337s in support of US government contracts in Iraq and elsewhere and the humanitarian relief organization "Brothers to the Recsue" used O-2As and C-337s providing support to people fleeing Communist Cuba.

Oh, The US Navy and the US Army have both used O-2As. The Army used them for liaison type work out of West Berlin and for range patrol duties at Yuma proving ground. The Navy used them for similar range safety purposes. They were recently retired from that duty.