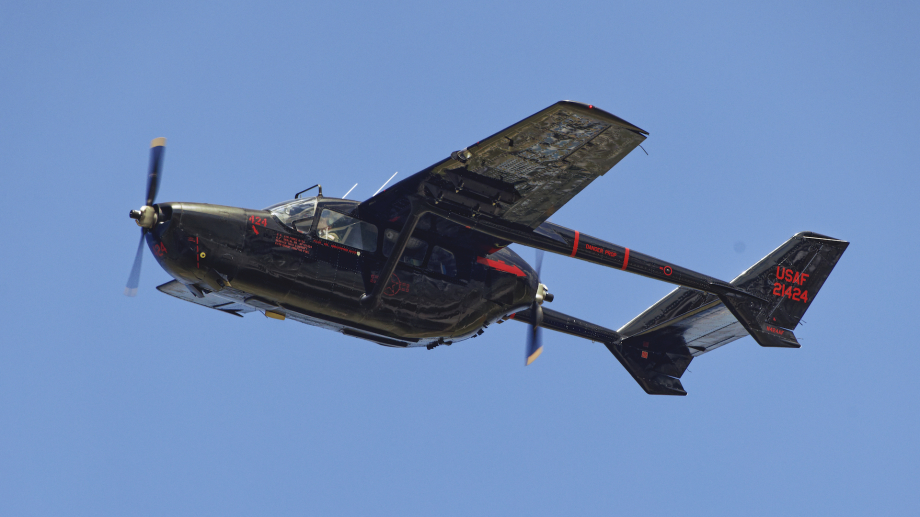 The restated mission: Although I am the legal owner of O-2A Serial# 67-21424, that does not give me ownership of its history. I believe that, in owning this airplane, I take on the responsibility to preserve its history and through this airplane, to educate others about the role this airplane played in a far-away conflict that, in the end, did help preserve freedom and hasten the end of the cold war. The task includes preserving the memory of the men who flew her in combat and those who maintained her after combat and prepared her for her next mission. It also extends to all O-2A’s and the Forward Air Control Mission. To promote this goal, as my schedule and finances allow, I fly the airplane to airshows, and particularly to EAA AirVenture at Oshkosh Wisconsin, to let people see the airplane, read information about it, and answer whatever questions I can. It is my hope that, in publishing information about this airplane, people who have personal memories of this airplane will be willing to share that information with this website so that others may come to a deeper appreciation of our history and the men who shaped that history. 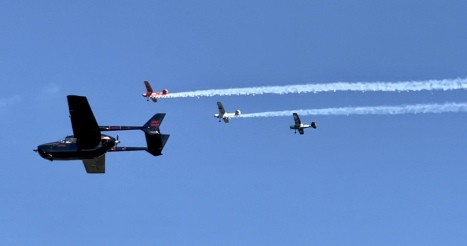 To promote this goal, as my schedule and finances allow, I fly the airplane to airshows, and particularly to EAA AirVenture at Oshkosh Wisconsin, to let people see the airplane, read information about it, and answer whatever questions I can. It is my hope that, in publishing information about this airplane, people who have personal memories of this airplane will be willing to share that information with this website so that others may come to a deeper appreciation of our history and the men who shaped that history.

I also use the airplane to fly in support of the EAA's Young Eagles program. This program gives youths 8 to 18 the opportunity to fly, at no cost to them. So far, I have given about 175 potential future aviators the experience of flight in the O-2A.

Wartime Service: This airplane was accepted by the US Air Force on 2 November 1967 and delivered to the 23d Tactical Air Support Squadron (TASS) in Nakhon Phanom Thailand, part of the 56th Special Operations Wing. The primary mission of the 23d TASS was to interdict supplies flowing down the Ho Chi Minh Trail from North Viet-Nam through Laos and into South Viet-Nam. The 23d flew missions over all three countries, with majority being over Laos in the “Secret War.” This mission was initially known as “Operation Cricket.” Many aircraft of the 23d TASS were marked with a stylized cricket on both sides of the nose of the aircraft. (Veterans of the 23d TASS asked that surviving aircraft of the squadron continue to display the cricket.) The pilots used the call sign "Nail" when operating from NKP Thaland and "Hammer" when operating from South Vietnam. 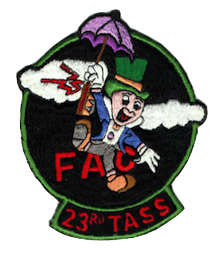 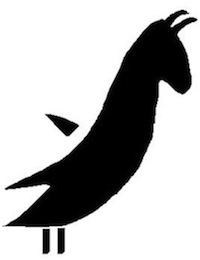 Generally, observation aircraft of the 23d would depart Nakhon Phanom (NKP) search for targets over Laos, the Republic of Vietnam, or sometimes North Vietnam, and then direct attack aircraft to strike those targets. Officially, neither the US nor North Vietnam were in Laos, so for the early part of its deployment, O-2 aircraft markings were noteworthy for being non-existent. Often, this was nothing more than the 3 digit aircraft number (e.g., “424.”) Pilots, too, flew without identification other than their dog tags! Many of the supporting aircraft were also non-standard. These often included similarly unmarked propeller driven aircraft, such as T-28s and A-26s. As the “Secret War” became less secret, the O-2’s worked with more standard USAF aircraft such as F4’s, F-100’s, and F-105 jets. Over time, the 23d’s O-2s also displayed more standard USAF markings. 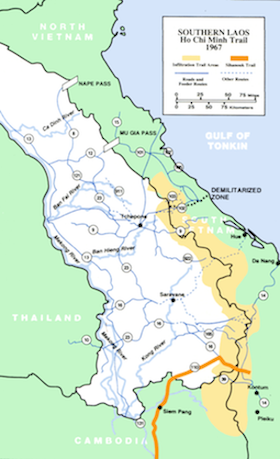 Most of the traffic on the trail moved at night, so night tactics were developed. Many of the 23d TASS O-2As were painted black with red markings. A Forward Area Navigator (FAN) would look for enemy activity using a hand-held starlight scope. Illumination flares were fired or dropped to mark targets for the attack aircraft.

Pilots and planes from the 23d sometimes operated out of South Vietnam to provide relief for the TASS squadrons based there or for special missions. For example, in early 1968, 424 flew in support of the siege at Khe Sanh. Three years later, in 1971, 424 was back in Quang Tri province to support the RVN strike into Laos (Operation Lam Son 719.)

During its time over Southeast Asia, 424 had several encounters with the enemy. It bears 14 bullet hole "scab" patches on various parts of its airframe witness to its combat service. Additionally, the entire right wing had to be replaced when it was returned to the United States (no idea how many patches were on that wing.)

While 424 served with the 23d TASS the squadron was awarded the Presidential Unit Citation, the USAF Outstanding Unit Award, and the Republic of Vietnam Gallantry Cross with Palm

Republic of Vietnam Gallantry Cross with Palm
Post-war service. In August 1971, 424 was withdrawn from service with the 23d TASS, disassembled, and shipped back to the United States. From September 1971 to August 1974 the airplane was assigned to the 704th TASS, Shaw AFB, SC. The mission of the 704th TASS was to prepare FACs for deployment to combat assignments. Pilots included a balanced mix of veterans returning from combat and newly assigned FACs, enabling the new pilots to benefit from the experience of the veterans.

In August 1974, the airplane was reassigned to the 169th TASS/182d TASG of the Illinois Air National Guard, which was stationed at Peoria International Airport, Peoria, IL. 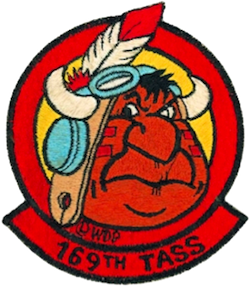 In addition to training for combat, the unit’s observation capabilities were used in domestic disaster response operations. While 424 was assigned to the 182d, it provided disaster relief assistance after the Canton tornado in July 1975. In 1976, the 182d TASG was awarded its first Air Force Outstanding Unit Award.

67-21424 was retired from service in October 1980 and placed into storage at Davis-Monthan Air Force Base, Arizona. While in storage, it was transferred to the National Museum of the Air Force and assigned the civil registration number of N424AF. 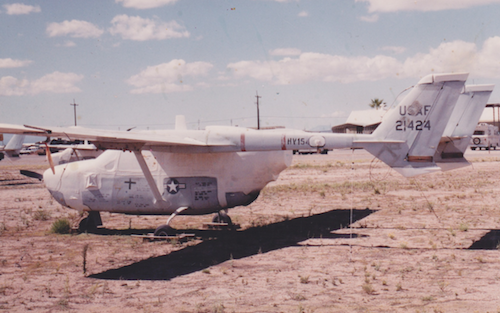 In 1994, 67-21424 was released by the US Air Force. It was restored to flying status and issued a new airworthiness certificate by Environmental Air Services based in Fernandina Beach, Florida. For the next ten years or so, 424 was used for whale population surveys, associated environmental work, and made occasional appearances in local airshows.

In January 2007 the airplane was acquired by Col. Christopher T. Mayer, USA Ret. and is based in Manassas, Virginia.

Initial restoration by the previous owner was utilitarian. The airplane was a working aircraft, primarily used for whale population surveys under contract to NOAA, operated under Part 135 of the Federal Aviation Regulations. It was painted in USAF colors and provided with appropriate interior furnishings, but it was not specific to the previous history of this airplane.

It is my intent to restore the aircraft to honor the men who flew these aircraft as part of the 23d TASS, while also being a functioning, family airplane capable of operating in modern airspace.

For several years after purchase, almost all available resources had to be devoted to making the airplane airworthy and in full compliance with Part 91 of the FARs. Overseas deployments with the Army also intervened. Visual restoration began as circumstances allowed. Research and application continue. This is an ongoing project, and quite honestly, I do not know if it will ever be complete.  I hope that former air and ground crew who worked with 424 will be able to provide more photographs and other information to help restore authenticity to the airplane’s appearance.

Paint Scheme: Veterans of the 23d TASS were very helpful in providing stories, battle histories, and numerous pictures. I recently received a photo of 424 taken while supporting Operation Lam Son 719 from South Vietnam. Many thanks to Maj Gary McDaniel for that. It confirmed that the airplane had been painted black for at least part of its service with the 23d TASS. As mentioned earlier, the markings applied to black O-2As changed over time. Some had only the most minimal markings, often becoming more elaborate over time. Maj McDaniel's photo from March 1971 shows the more elaborate marking. I am following a middle road, using the minimum markings required by the FAA type certificate for the M337B and those specified by the USAF for FAC aircraft while 424 was in service. One difference is that the USAF used flat black. The EAA's Warbirds of America allows gloss paint in lieu of the original black to facilitate cleanliness and preservation of the airframe and parts. I retain gloss black paint on the aircraft, with the exception of the top of the front engine cowling. This is flat black to reduce glare. 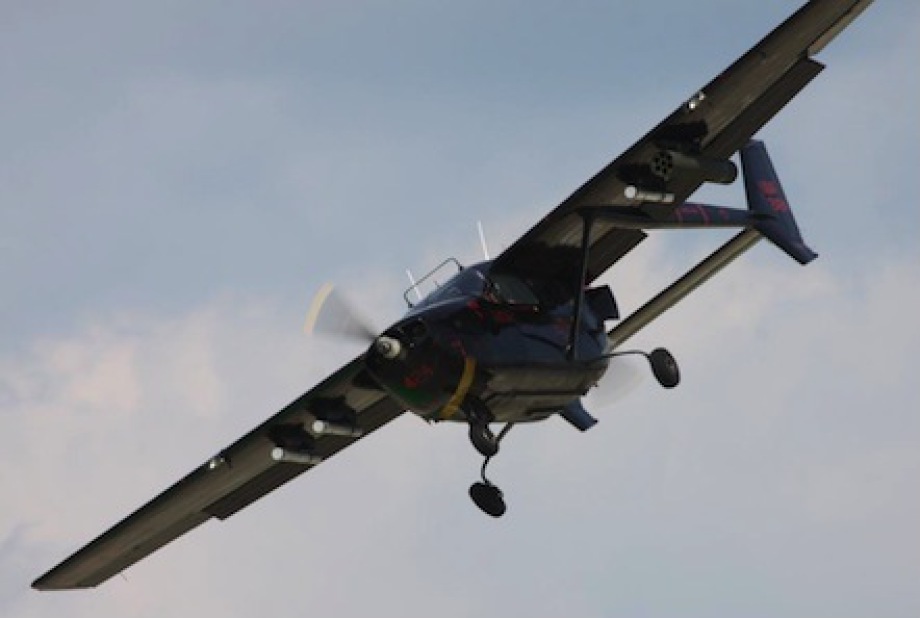 Interior: Avionics have been upgraded to ensure that the airplane can operate safely as a family aircraft in the modern airspace system. The old, vacuum tube radio rack in the back of the airplane was removed, rear passenger seats installed (the 3rd and 4th seats were optional even during its service life) and all seats were padded, given that the occupants are no longer “padded” by parachutes. More work remains to restore various interior furnishings. 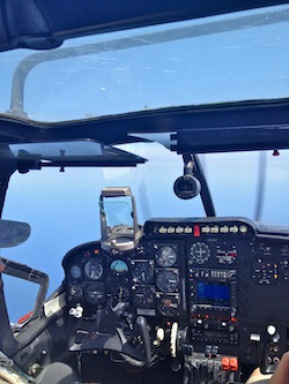 The view over Lake Michigan, returning from Oshkosh 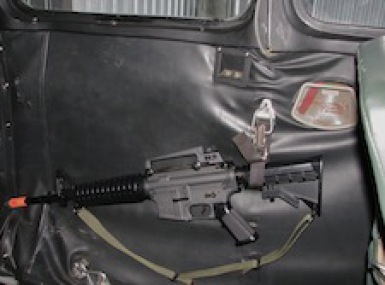 A truck may have a rifle rack, but how many people can claim that their AIRPLANE came with a rifle rack as standard equipment?